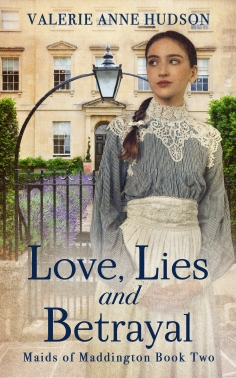 Welcome back to Maddington House. It might seem different, but it’s still a madhouse.

Ready or not, in 1905, the wealthy Montague family has to welcome back one of its most notorious members: Edward Montague himself.

Fresh out of prison and notably bitter, Edward proceeds to make the lives of his relatives and live-in servants as miserable as possible.

And that’s before he even remarries.

Although his new wife is a rich widow, Edward’s questionable endeavors make their union seem like a profitable arrangement, and his actions continue to keep everyone on their toes.

They might be mere maids, but they see and hear way more than they let on.

Beautiful Aggie, who had a traumatic childhood before joining the Madhouse at the age of twelve, now longs for some well-deserved glamor and excitement. Unfortunately, she finds them both in Sergei Volkov, one of Edward’s charming but sketchy business associates...

Meanwhile, sweet kitchen maid Bessie harbors an unrequited crush on the handsome chauffeur.The last thing she expects is to get involved in the Suffragette movement and the violent demonstrations for women’s voting rights. And yet she does.

Honest, hardworking housemaid Alice longs to leave all the madness, secretly dreamIng of starting her own business.

It doesn’t take long for the three maids to realize they’re completely out of their depth, but instead of drowning, they keep pushing through.

They are Maddington maids, after all. And Maddington is no place for the weak of heart …